Clifford Brown Born This Date in 1930

Posted by Jerry Greenberg on October 30, 2017 in Special Announcements | 0 comments

Clifford Brown's death in a car accident at the age of 25 was one of the great tragedies in jazz history. Already ranking with Dizzy Gillespie and Miles Davis as one of the top trumpeters in jazz, Brownie was still improving in 1956. Plus he was a clean liver and was not even driving; the up-and-coming pianist Richie Powell and his wife (who was driving) also perished in the crash.

Clifford Brown accomplished a great deal in the short time he had. He started on trumpet when he was 15, and by 1948 was playing regularly in Philadelphia. Fats Navarro, who was his main influence, encouraged Brown, as did Charlie Parker and Dizzy Gillespie. After a year at Maryland State University, he was in a serious car accident in June 1950 that put him out of action for a year. In 1952, Brown made his recording debut with Chris Powell's Blue Flames (an R&B group). The following year, he spent some time with Tadd Dameron, and from August to December was with Lionel Hampton's band, touring Europe and leading some recording sessions. In early 1954, he recorded some brilliant solos at Birdland with Art Blakey's quintet (a band that directly preceded the Jazz Messengers) and by mid-year had formed a quintet with Max Roach. Considered one of the premiere hard bop bands, the group lasted until Brown's death, featuring Harold Land (and later Sonny Rollins) on tenor and recording several superb sets for Emarcy. Just hours before his death, Brownie appeared at a Philadelphia jam session that was miraculously recorded, and played some of the finest music of his short life. 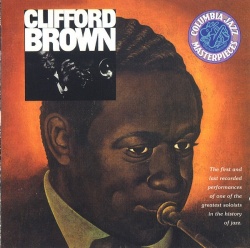 Clifford Brown had a fat warm tone, a bop-ish style quite reminiscent of the equally ill-fated Fats Navarro, and a mature improvising approach; he was as inventive on melodic ballads as he was on rapid jams. Amazingly enough, a filmed appearance of him playing two songs in 1955 on a Soupy Sales variety show turned up after being lost for 40 years, the only known footage of the great trumpeter. Fortunately, virtually all of his recordings are currently available, including his Prestige dates (in the OJC series), his work for Blue Note and Pacific Jazz (on a four-CD set), and his many Emarcy sessions (reissued on a magnificent ten-disc set). But the one to pick up first is Columbia's The Beginning and the End, which has Brown's first and last recordings.

[Biography by Scott Yanow from allmusic.com]