Posted by Jerry Greenberg on May 13, 2017 in Special Announcements | 0 comments

One of the most significant arrangers in jazz history, Gil Evans' three album-length collaborations with Miles Davis (Miles Ahead, Porgy and Bess, and Sketches of Spain) are all considered classics. Evans had a lengthy and wide-ranging career that sometimes ran parallel to the trumpeter. Like Davis, Gil became involved in utilizing electronics in the '70s and preferred not to look back and re-create the past. He led his own band in California (1933-1938) which eventually became the backup group for Skinnay Ennis; Evans stayed on for a time as arranger. He gained recognition for his somewhat futuristic charts for Claude Thornhill's Orchestra(1941-1942 and 1946-1948) which took advantage of the ensemble's cool tones, utilized French horns and a tuba as frontline instruments, and, by 1946, incorporated the influence of bop. He met Miles Davis (who admired his work with Thornhill) during this time and contributed arrangements of "Moon Dreams" and "Boplicity" to Davis' "Birth of the Cool" nonet. 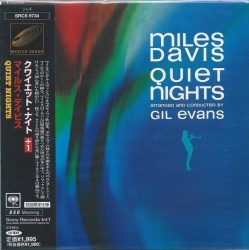 After a period in obscurity, Evans wrote for a Helen Merrillsession and then collaborated with Davis on Miles Ahead. In addition to his work with Davis (which also included a 1961-recorded Carnegie Hall concert and the half-album Quiet Nights), Evans recorded several superb and highly original sets as a leader (including Gil Evans & Ten, New Bottle Old Wine, and Great Jazz Standards) during the era.

Among the albums he worked on in the '60s for other artists were notable efforts with Kenny Burrell and Astrud Gilberto. After his own sessions for Verve 1963-1964, Evans waited until 1969 until recording again as a leader. That year's Blues in Orbit was his first successful effort at combining acoustic and electric instruments; it would be followed by dates for Artists House, Atlantic (Svengali), and a notable tribute to Jimi Hendrix in 1974. After 1975's There Comes a Time (which features among its sidemen David Sanborn), most of Evans' recordings were taken from live performances. Starting in 1970 he began playing with his large ensemble on a weekly basis in New York clubs. Filled with such all-star players as George Adams, Lew Soloff, Marvin "Hannibal" Peterson, Chris Hunter, Howard Johnson, Pete Levin, Hiram Bullock, Hamiet Bluiett, and Arthur Blythe among others, Evans' later bands were top-heavy in talent but tended to ramble on too long. Gil Evans, other than sketching out a framework and contributing his keyboard, seemed to let the orchestra largely run itself, inspiring rather than closely directing the music. There were some worthwhile recordings from the '80s (when the band had a long string of Monday night gigs at Sweet Basil in New York) but in general they do not often live up to their potential. Prior to his death, Evans recorded with his "arranger's piano" on duets with Lee Konitz and Steve Lacy and his body of work on a whole ranks with the top jazz arrangers.

[Biography by Scott Yanow from allmusic.com]